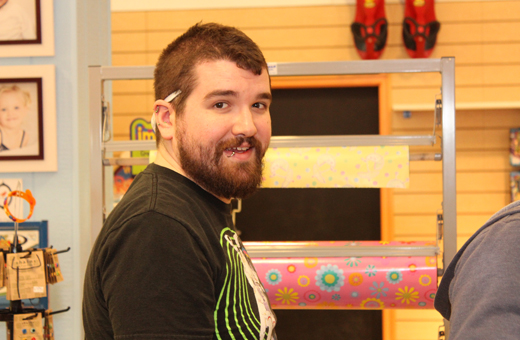 I’ve kept pretty silent about the recent events. If you haven’t heard, AJ Kirk passed away last week. AJ was the original co-host of YoYoRadio, but more importantly, he was my friend.

I had the unique privilege to see AJ go from an awkward skinny kid who never yo-yoed to one of the most popular yo-yoers in the world. For the second time in two years, my heart is broken to see someone who was so young leave this world.

AJ was a Boy Scout. As Mitchell’s sold Scout stuff, he inevitable ended up coming to the store. While waiting in line one day with his uncle, he picked up a set of juggling balls. He immediately took to juggling. He started coming to our yo-yo club. He scoffed at the yo-yoers, preferring his juggling and diablo. Despite his disdain for yo-yoing, he became a regular. He dabbled with yo-yoing, but never more than messing around with one. He came nearly every week. He came so often that when our original club runners Raleigh and Luke both left Mitchell’s, I hired him to run yo-yo club, because despite his lack of yo-yo skills, AJ was a born entertainer who clearly loved kids.

When I went to Toy Fair near that time, Duncan had a huge inflatable yo-yo set up in the entrance of the Jacob Javitz Center. For the Mid-Atlantic Regional YoYo contest that year, I asked Duncan’s Mike Burke about the possibility of using the inflatable. He was willing, but we would need to make sure it was shipped to Dollywood the next week for a yo-yo demo. The package was huge, and would have cost hundreds of dollars to ship to Dollywood. I joked to Mike that I could just deliver it, it would probably cost less. He said if I was really gonna do that, he could use another demonstrator for the event. I suggested that AJ could do it. I told Mike he was a basic yo-yoer, but he was a great performer. To his credit, Mike agreed. AJ drove the inflatable to Dollywood. He spent several days there, demonstrating with Duncan’s Jack Ringca. Jack was one of the outstanding early 5A yo-yoers. AJ and Jack hit it off. AJ and 5A hit it off too. AJ quickly mastered the 5A basics and when he came home, he flew his 5A flag proudly and over the past 15 years or so and never relented.

He was the father of the ‘First State of 5A’ yo-yoers who came out of the early 2000’s at Mitchell’s and then YoYoJoe’s. I think it’s fair to say that without AJ, 5A would never have seen the likes of Tyler Severance and Jonathan Robinson. He inspired easily thousands of kids at yo-yo clubs and contests around the country. He was featured in a short on Nickleodeon about the National YoYo contest in Chico, California – where he infamously coined the word ‘spobby,’ in his description of yo-yoing as neither sport nor hobby. He became famous as a patient transport at the duPont Hospital for Children. He used his yo-yoing and overall goofyness to distract kids who had bigger worries in life than they should have as kids.

He was my cohost on YoYoRadio. We spent hundreds of hours together doing the podcast. He drove me nuts sometimes, with his inevitable complaint that “I’m tired” sometime during the podcast, but he was the perfect foil for my old crotchety guy persona. We bickered all the time on air. I remember Stu Branoff describing it like we were an old married couple. He went to Worlds in ’05 and shocked everyone by finishing in the top three in 5A. If you listen closely to the beginning of his freestyle, you can hear someone yell ‘YoYos Coast to Coast!’ (The original name of the show)
We’d grown apart the past couple of years, more so after YoYoJoe’s closed in August of 2013. He was last on YoYoRadio in March, celebrating our 10th Anniversary.

He had his struggles, but constantly seemed to be turning the corner and always said he was “working on big things.” The last time I really talked to him was when he came to my house for that YoYoRadio show in March. He told me that he was doing much better, that he had some really down times in the previous year.

It’s my opinion that AJ Kirk touched more lives in the past 15 years than anyone in yo-yoing.

Sometime over the next week, we will have a special show dedicated to the memory of our friend. We would love to have people call in and share their experiences with AJ.