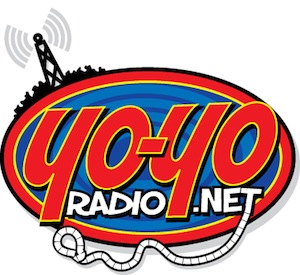 6/9/11 – Initial show under new incarnation with new co-host Tom Uleau. We speak with YoYo Factory’s Gentry Stein and Steve Brown blows us off!

6/16/11 – JonRob in studio. Ben McPhee via Skype. Between the reckless talk and multiple giveaways, could be the best show ever.

6/23/11 – Pat Cuartero joins us from the future, Shane Karan from the past and yo yo soup from another universe. Bonus! We try to give stuff away!

7/7/11 – Ian Johnson, from ‘America’s Got Talent’ joins us, plus we address the JonRob/Zammy fallout.

10/13/11 – Andre Boulay talks about the Triple Crown of YoYo, YoYoExpert & Mass States plus AJ Kirk makes it into the studio for the first time ever! 2 hours, rated (R) for potty mouth.

10/20/11 – YoYoRadio lurches back into ‘PG’ mode with the second edition of the ‘Yo-Yo Game Show’ with Stu Branoff. We give away ten prize packs through trivia quesitons, asking people to post videos, and more wacky stuff. Also, a very special ’40’s & Burritos,’ including the winner of the ‘Lazy Enchilada’ contest.

10/27/11 – We talk with Patrick McQuary, who’s leg was saved by the CLYW Bear vs Man yo-yo in his pocket when his group was hit with an IED in the Middle East, plus ’40’s & Burritos,’ with Boyd Seth & his special guest Jacob Deffenbaugh

11/10/11 – We talk with Drew Tetz on his birthday, where he claims that other famous yoyoers are hanging with them. Oddly, none of them want to talk to us. Plus, ’40’s & Burritos with Boyd Seth’ takes a controversial stand against Hot Dogs.

11/17/11 – We talk about our as yet unnamed Awards show – adding categories and nominees. Kolton Tennison calls us about a billion times. Plus, ’40’s & Burritos with Katelyn Rose Garcia

12/08/11 – We talk to Chris Allen about the YoYoSkills annual yo-yo awards, plus Samm Scott joins us to try to talk smack about people.

12/22/11 – AJ Kirk joins us in store and brings a pile of new YoYoJam yo-yos. We try to talk to Anthony Rojas, but our Skype connection stinks, plus Joe gets butt hurt and AJ Kirk nearly dies of laughter!